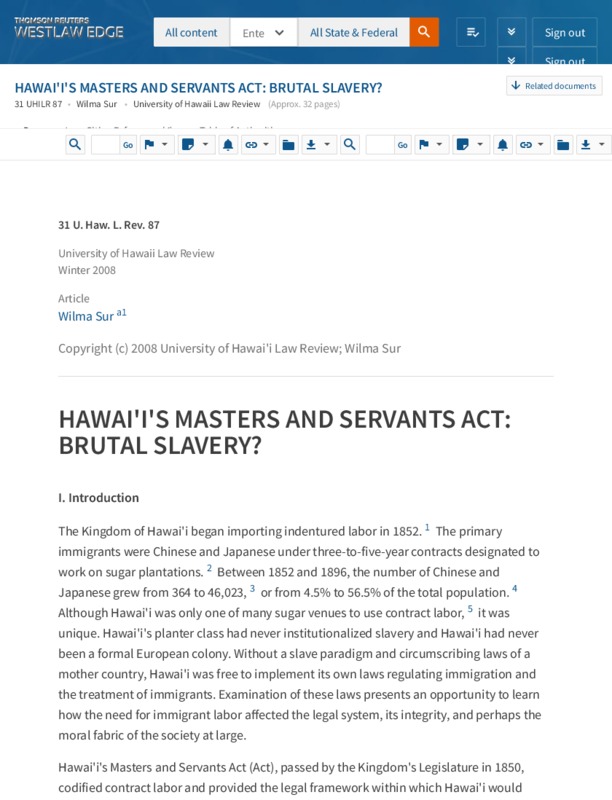 The sugar plantation businessmen sought to maintain the agricultural plantation system to take advantage of the fertile volcanic soil across the islands. William Little Lee was a lawyer from the American South who became the Chief Justice for the Hawaiian Kingdom, under King Kauikeaouli.  In 1850, Lee drafted the Masters & Servants Act, which stated that workers (servants) had to provide work to their employers (masters) according to the contract.   Contracts often changed without notice to workers.  If workers were exploited and abused during their jobs, they could not run away as that would breach their contract, punishable by imprisonment or redemption, plus interest, of lost hours.  There were cases of Kanaka Maoli and early immigrant Chinese workers being beaten by their employers (Sur).

While the Masters & Servants Act was abolished under the Republic of Hawai’i, it set the precedent for Hawaiʻiʻs immigration contract worker system that was controlled by corporate agricultural businesses. After 1900, laborers from Asian, the Pacific, Europe and North American were imported to work in the plantations and other industries.  They were paid differently according to race, class and gender. Those with closest proximity or assimilability to Whiteness were paid higher than those who were not.

Racial capitalism evolves.  When it exhausts any resources for production, such as labor, it must seek resources elsewhere to further expand and maintain profit-making. In order to garner the support for this expansion, it must convince the servant that they can begin to benefit by ascending into the middle class, or become a token-master, while the colonization and control of new territories and populations create the new pool of servants (Robinson 1983, Kelly 2017).